Applied Image, Inc., a global manufacturer of precision imaged optical components, test targets and charts, calibration standards, and photomasks since 1979, is pleased to announce that Glenn Jackling, the current CEO & President, has purchased the company from its founder, Bruno Glavich, effective January 1, 2022.

The ownership transition is a testament to the tremendous business created under company founder Bruno Glavich’s leadership over the past 43 years. The company anticipates a seamless transition as the current team will continue to deliver the same excellent and reliable products and services they are known for worldwide.

“This is an exciting time to make this transition as optics, photonics, and imaging technologies have become ubiquitous in virtually every industry, and we can offer both standard and custom solutions for many of these applications,” said Mr. Jackling. He went on to say, “We have attracted an experienced and talented workforce that wants to help build on Bruno’s years of success as we transition our US-based company to new ownership. We look forward to continued growth and new opportunities.”

Mr. Glavich began the company by providing essential OptoImaged products to the local Rochester community. Since then, APPLIED IMAGE has earned a reputation globally for its unique ability to create components and standards with unsurpassed quality and precision. Some of its best-known products are:

“A proud moment for the company was being selected by NASA to manufacture the camera systems’ calibration targets used on two of the Mars Rovers and the International Space Station,” recalled Mr. Glavich. Additionally, “Glenn’s relentless focus on customer experience, product quality, and innovation make him the ideal leader to guide the company into a new era while keeping it in Rochester – something I wanted,” said Mr. Glavich. 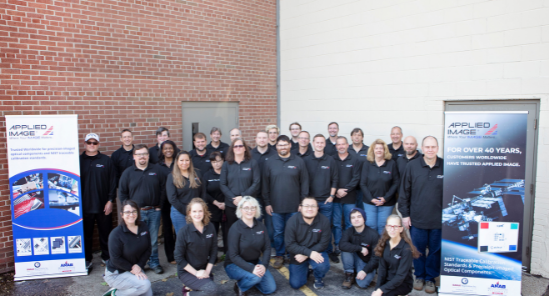 Over the years, Mr. Jackling has been instrumental in updating the company’s capabilities to more advanced manufacturing technologies and formalizing its quality systems with ISO 9001:2015 certification and becoming an ISO 17025:2017 accredited calibration lab. In this newly released video, Mr. Jackling and his team showcase some of the company’s latest technology, quality processes, and operational procedures that support customer success.

APPLIED IMAGE is located in Rochester, NY, a community recognized globally as a primary center for Optics, Photonics, and Imaging Technology. The company is a global supplier of precision imaged optical components and calibration standards for a wide range of industries and applications. Standard and custom products are used to test, calibrate, align, control, or measure optics, photonics, or imaging systems or serve as OEM components within an imaging or inspection system. www.appliedimage.com

After graduating from Rochester Institute of Technology with a BS in Imaging Science and MBA degrees, Mr. Glavich participated in various volunteer roles at his alma mater, including in the advisory panel to the president of RIT. Additionally, Mr. Glavich was a founder of the Rochester Region Photonics Cluster (RRPC) and assisted the group in becoming legally organized while serving on their board. In addition, he was instrumental in establishing Rochester as the PIANY headquarters and identifying leadership to guide the RRPC. Today Mr. Glavich resides in Florida with his wife and daughter, and they enjoy spending summers in Rochester.

Glenn Jackling has served as the CEO & President of APPLIED IMAGE since 2015. Glenn was awarded an MBA from the University of Rochester and an MS in Applied and Mathematical Statistics and a BS in Mechanical Engineering from Rochester Institute of Technology. Mr. Jackling held numerous senior management roles at various companies in the local community, including Eastman Kodak, CPAC, and Newtex. Glenn lives with his wife Stephanie in Greece, NY, and has two sons and two step-daughters.